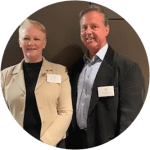 On Friday 10 May, ATMS President Peter Berryman, attended the Chinese Medicine Board of Australia (CMBA) meeting with six other national Associations and the Australian Health Practitioner Regulation Agency (AHPRA).

Also in attendance was Christine Berle, a practitioner member of CMBA, and one of the five founding members of ATMS. Ms Berle co-founded ATMS on 7 September 1984 with Dorothy Hall, Roy Hand, Garnet Skinner and Alan Jones.

Though Chinese Medicine became a Registered Allied Health Profession in 2012, this was the first roundtable face-to-face meeting between CMBA and the six national Associations representing Chinese Medicine practitioners.

The other Associations in attendance were:

The meeting between CMBA and these national Associations was an enormous success and may now become a regular annual event.

Mr Berryman will also be representing ATMS at an Australian Union of Chinese Medicine (AUCM) meeting on Sunday 19 May 2019 in Melbourne, as part of the AACMA annual conference. This will be the one year anniversary of AUCM, and only their second ever face-to-face meeting. AUCM teleconferences have been held approximately every three weeks in the last year, with ATMS hosting four of these on a rotating basis.