ATMS would like to congratulate Dr Kerryn Phelps on her historic victory in the seat of Wentworth.

Natural medicine is currently chosen by 58% of Australians to support health and wellbeing and Dr Phelps supports the principle of continued coverage of natural therapies within health funds, despite current changes being implemented by the Government. 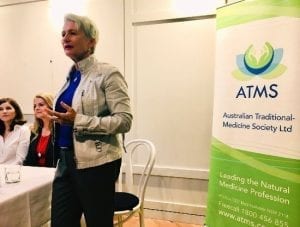 ATMS was pleased to recently host Dr Phelps, Angela Vithoulkhas, Licia Heath and Shayne Higson in a Candidates Forum during the election campaign for Wentworth. The forum was hosted by ATMS President, Peter Berryman, Vice-President, Trisha Mok and Treasurer, Christine Pope and discussions covered a wide range of topics with strong support from all candidates for complementary medicine, recognising its current role as a viable option for Australians.

Dr Phelps is a distinguished medical practitioner and is now furthering her career in public service following her term on the Council of the City of Sydney as Deputy Lord Mayor. Dr Phelps has achieved a number of significant career firsts, including being appointed as the first female President of the Australian Medical Association, where she worked on influencing health policy at a State and Federal Level. She made significant changes during her tenure, implementing a solution to the medical indemnity crisis as well as initiating the organisation’s policies on complementary medicine, gender diversity and sexuality.

The election of a candidate who is supportive of complementary medicine is critical in this current environment seeking to remove subsidies for private health insurance. Further changes forecast by the recently announced Labor policy would seek to remove the GST exemption for naturopathy and herbal medicine treatments.

ATMS looks forward to working with Dr Phelps and like-minded, committed Parliamentarians to ensure natural medicine treatments are available as effective, viable choices within the Australian healthcare and wellness system.